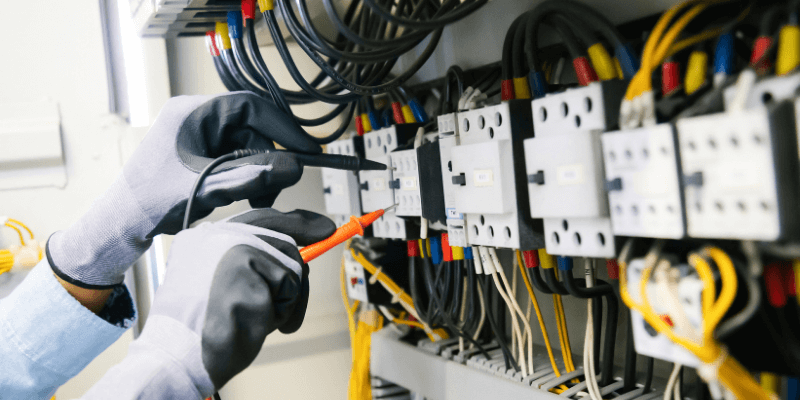 It would be hard to picture a world without electricity. It has become something we rely on in almost every aspect of our everyday lives. But as much as it is beneficial, electricity can also pose a safety threat. It has enough force to kill, or damage connected devices and appliances when things go wrong. Fortunately, devices have been developed to protect people from harm, and ensure electrical circuits work within the optimal current and voltage ranges.

What are Electrical Protection Devices?

An electrical protection device is used to keep a large current, voltage or power surge out of a defined part of an electrical circuit. Its role is to protect people, circuits and connected equipment in the case of electrical faults. This can be a short circuit, where due to falling resistance, a large current flows through the wires. It leads to overheating and potential electrical fires. Overheating in wiring and cables can also be caused by too many connected devices or an overloaded circuit. Similarly, during an earth fault, there is a large increase in current which extends to other parts of the circuit. Accidental contact with the conductors in such cases will cause a potentially fatal electrical shock. To prevent such occurrences, an electrical protection device is installed to stop the flow of current or cause a break in the circuit.

Electrical protection devices may be self-explanatory, but they have many purposes. The most important is that they protect people during a safety hazard. In cases of overcurrent surges, higher amperage will be high enough to cause a heart attack. Less critical, but still severe injuries include permanent nerve damage and third-degree burns. Besides people, electrical devices limit damage to equipment by preventing overheating, which is the main cause for electrical fires, and also prevent faults from spreading to adjacent circuits. This way, electrical protection devices maintain stability and continuity in the power supply.

The basic types of devices used in protecting a circuit are fuses, circuit breakers, residual current devices (RCDs), and residual current breakers with overcurrent (RCBOs). Though not a protection device in the traditional sense, switches, particularly mains or safety switches set in the mains circuit board, are used to cut power supply during faults or regular maintenance, but need to be manually actuated.

A fuse is the simplest electrical protection device. It contains a piece of conductive wire, which breaks (or ‘blows’) when the current going through the fuse is too high. The melted fuse, in effect, opens the circuit and cuts power.  There are two basic types of fuses – plug type and cartridge type. Plug type fuses are found in low voltage, low current circuits, often in older electrical installations. These are rapidly being replaced by circuit breakers. Cartridge type fuses are rated for higher current and voltage, and are still used in many fields. Both types can handle short circuits or overcurrent when paired correctly for the application. Some also have a time delay function for circuits with high surge or starting currents, especially in industry.

While fuses must be replaced, circuit breakers can be reused in the case of electrical faults without replacing any parts. Instead, they are reset and ready for use again Which means a circuit breaker operates like an automatic switch. When an overcurrent is detected, an electromagnetic coil inside the breaker triggers a trip bar and opens the circuit. This kind of circuit breaker can be found in various types, depending on the current loading in the circuit and the time it takes to break. B-type Miniature Circuit Breakers or MCBs are found in residential installations, while C and D type breakers are found in industrial applications and with faster tripping times.

In addition, there are thermal circuit breakers, with a bimetallic strip, that when heated due to high heat from overcurrent, bends and trigger the trip bar. These are found in low current applications. A combination of both types, thermal-magnetic circuit breakers are the most common circuit breakers used in home distribution boards.

Residual Current Devices or RCDs are designed to detect even the smallest inconsistencies in current between the live and neutral wires in the event of an earth fault. This in turn causes a short circuit and a dangerous level of current. Common reasons include damage to the insulation or the wiring due to heat, moisture or vermin. RCBs protect people from possible electrocution and prevent electrical fires.

RCDs can be wired to protect one single circuit, single-pole RCDs, or a number of circuits in a single unit. The advantage here is that while the affected circuit is cut, other circuits in the installation work just fine. RCDs are often combined with an MCB in the appropriate rating for each circuit involved, to allow for both overcurrent and short circuit protection. Besides switchboards, they are also incorporated in residential and industrial sockets.

Residual current breakers with overcurrent protection, or RCBOs, are more often found in commercial and industrial settings to protect individual circuits. They are a combination of an RCD and MCB that trips a circuit in extremely short times to prevent electrocution or equipment damage. They offer protection from short circuits, current overloads and earth faults.