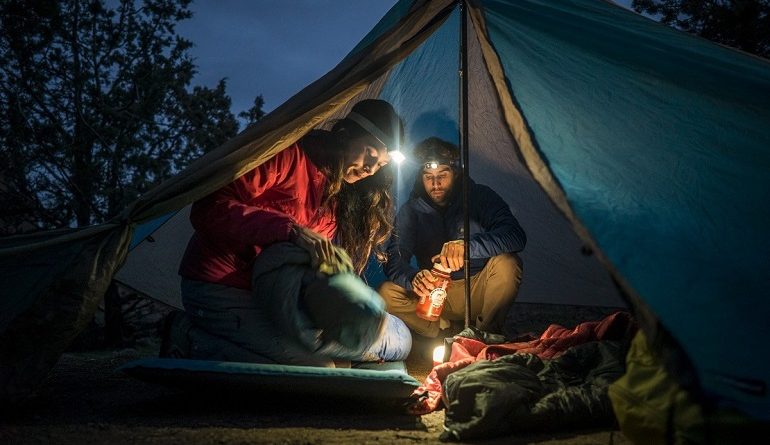 Outdoors
November 1, 2019 Tim Glock
Flashlights have been the most popular source of illumination for so long now that many campers aren’t even considering the alternative options. And while yes, the flashlight is still king, there are a few alternatives that are far more convenient but most campers overlook and underestimate, such as headlamps. Whether you’re setting up camp, running a trail at dusk, or looking for something in your trunk after the sun has gone down, nothing beats the hands-free convenience offered by a camp head lamp. Nowadays, headlamps use LEDs exclusively, simply because they’re rugged, energy-efficient and long-lasting – everything you want from an illumination source for camping. But how do you pick the ideal head lamp for you? There are several variables that you’ll need to consider.

First and foremost, you’ll have to decide on the type of beam that the head lamp will produce. There are three basic types of camp head lamp beams – flood (wide), spot (focused) and adjustable. Flood beam-type head lamps are ideal for performing general camp tasks, reading and up-close repair work. These beams usually can’t illuminate long distances. Spot beams are ideal for long-distance viewing, making them ideal for navigating trails. And lastly, adjustable beams are the most versatile and they combine the best of both worlds. Expect to pay more for an adjustable beam headlamp.
Next, you’ll have to consider the head lamp’s light output and beam distance. The output of LED-powered light sources is measured in lumens. Lights with high lumens consume more energy than their lower lumen counterparts. So in most cases, the more lumens the camp head lamp has, the brighter it will illuminate, but the shorter its run-time will be (debatable, depends on battery). However, worth noting is that the way the headlamp directs and focuses the light can also influence how the lumens are utilised. As far as beam distance goes, headlamps are tested how far in metres they can project light. While lumens represent how brightly the headlamp glows at its source, the beam distance represents how far the beam travels. Further, you’ll have to consider the head lamp’s run time. This basically gives you an idea of how long the head lamp will last when it’s fully charged. However, there have been some changes recently in how this is measured, so you may find different, confusing numbers. While once the run time of a head lamp was measured until it could no longer produce any usable light (equivalent to the light produced of a full moon) at two metres, the new standard uses 10% of a head lamp’s original brightness as the point where its run time ends. For instance, in the first case, a 500-lumen head lamp might have a run time of 30 hours, whereas in the second case, the head lamp’s run time may measure at just 3 hours. Even though in the second case the head lamp will provide 27 more hours of illumination, the light will be diminished.
Most camp head lamp models are quite lightweight, compact and similar in size. You probably won’t notice a difference in size and weight until you start looking at some higher-powered models. Some head lamps feature top straps and external battery packs that add to the weight and make them bulkier. These models, however, are intended for specific applications like climbing, instead of routine adventures. Speaking of batteries, the most popular battery options for headlamps are lithium-ion and NiMH batteries. These batteries perform well in cold-weather and provide enough power to run even the most powerful headlamps for extended time periods. Moreover, most head lamp models offer at least two modes – high and low. More advanced models can offer three or more, including strobe, mid and boost mode. The low light mode is the standard used for most camping tasks and walking along easy trails. The high mode is a great option where you want a lot of illumination, over longer distances. The mid strobe light mode can come in handy in emergency situations. The mid light mode is there just to add more versatility, and the boost mode is rarely found, only on high-end models, and it permits an extra-intense light to be produced for a short time period.
And lastly, consider whether you want the head lamp to have extra features, such as water resistance, on-off switches, red light mode, tilt or regulated light output. The regulated light output feature can come especially come in handy, so instead of gradually dimming as the batteries discharge, the brightness level of the head lamp will remain the same throughout the entire life of the batteries. On the downside, however, when the batteries run out, the headlamp will abruptly go dark. This can leave you looking for extra batteries in the dark.
Featured Posts
Safety
Your Guide to Choosing the Best Lab Coat
May 26, 2022 Emma Taker