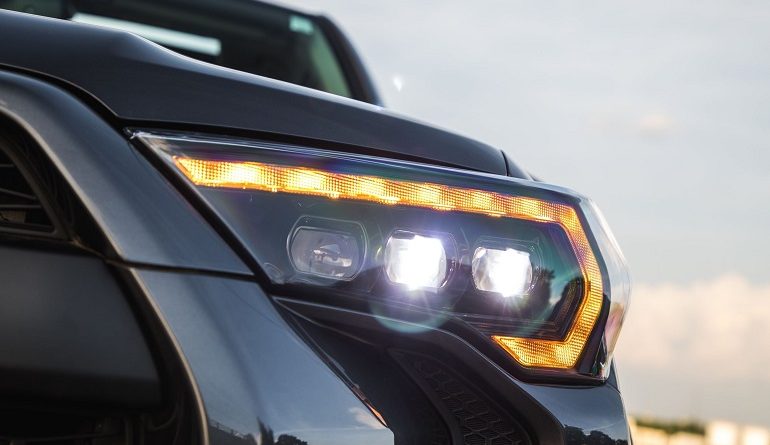 If you were riding around with your Toyota at night and noticed that some vehicles have significantly brighter headlights than yours, what you saw were probably LED headlights. These parts of your ride are an essential safety feature, especially when driving in low-light conditions and at night.

Throughout history, cars have used a variety of headlights. In the earlier days, horseless carriages used carriage lamps that utilised a burning wick that was steeped in oil to generate illumination, and mirrors to direct it towards the road. But these lamps were unsuitable for travelling at a higher speed. Eventually, acetylene lamps were designed, which were the first electricity-based lights. In the early 90s, HIDs were invented, and only a decade later, Audi introduced LED headlamps.

LED headlamps are becoming increasingly more popular, and many people get them as replacement headlights for their vehicles. But before we talk about these aftermarket Toyota car parts, let’s talk about what the basic parts of headlight bulbs consist of. Halogen headlamps are the most common type of bulb used today, but LED headlights use a similar layout as well. LED bulbs are positioned at the centre of an elliptical reflector which bounces the emitted light onto a point on a lens. The lens intensifies the light, producing a beam in front of your vehicle. Every vehicle features a selectable high and low beam as standard, which is made possible via the cutoff shield that’s positioned in the centre where the light converges as a result of the reflector.

Most gearheads and car-savvy people know that there’s a wide range of car headlight accessories available, ranging from headlamp covers, known as car lashes, to aftermarket bright bulbs and entire headlamp assemblies. All of these aftermarket Toyota car parts can be found both online and in brick-and-mortar retail automotive stores. As aforementioned, almost every vehicle nowadays has low and high headlight settings. In order to accomplish this, headlamp assemblies feature a single bulb with built-in low and high beam function, known as a dual-beam bulb. In some cases, you’ll have to buy two separate bulbs, one for the high and another for the low beam.

Every type of bulb has its own distinct advantages and disadvantages. Halogens are very affordable, but they’re fragile and don’t have a long life span. HIDs have a high lighting output, but this makes them very energy-intensive, and they can dazzle oncoming drivers. Moreover, HIDs generate a lot of heat, which makes them a fire hazard if installed improperly. LED bulbs are very bright, last more when compared to HID and halogen lights, and they don’t generate as much heat as HIDs. The one disadvantage they have is their higher price tag. Besides these three types of bulbs, there are also Xenon headlights, which aren’t popular in the automotive industry, even though they’re quite bright. The reason why they’re not popular is that they need to first heat up before they reach full brightness. There are also laser headlights that use lasers instead of beams, but this is a relatively new technology, which means these headlights are quite expensive.

If your Toyota’s bulbs are showing signs of faltering, check your owner’s manual to see what type of bulb it’s using. Alternatively, remove the bulb and take it to an automotive store to ask for a replacement. If you’re switching from halogen to aftermarket LED bulbs, you’ll need to buy a conversion kit. A conversion kit comes with LED bulbs, ballasts and wiring. Replacing the headlamps is pretty straightforward. Park your vehicle, turn the engine off and disengage the battery. Pop the hood to get access to the headlamp assembly through the engine bay and carefully pull out the headlights you currently have. Turn the bulb connected gently and slowly to release it, and find the metal base that’s fastened by a tension wire. Press the wire down to unlock it and slide the headlamp out of the housing.

Then, take the connector end of the ballast and connect it to the end of the bulb and the wiring of your Toyota. Lightly tap the ballasts to see if you’ve placed them properly. Secure them using double-sided tape, or for a more secure fit, drill holes for screws. Lastly, test your new LED headlights to see whether they’re illuminating in the right direction. While doing all of this is pretty simple, it does require some general knowledge of your vehicle and using some basic tools. If you’re unsure about whether you can do it yourself, it’s best to leave it to a professional mechanic. While you may pay an extra buck for the installation process, your lights are your most important safety feature alongside your brakes, so it’s really important they’re functional and properly installed so that you avoid getting involved in accidents.