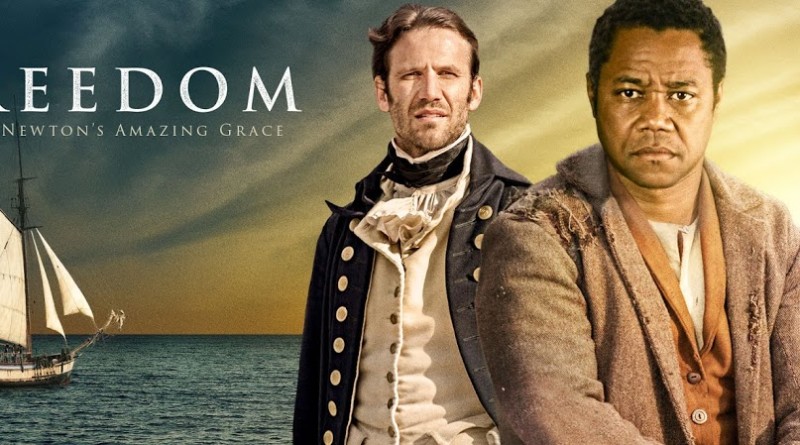 There are a few films produced by Hollywood that portray powerful Christian themes and Freedom is one of them. The movie was released in June 2015, and although it got some bad reviews, in my opinion, it is one of the best movies that every Christian in the world should see. All I’ll say is this – the movie changed my life forever!

The Freedom movie starts with two contrasting narratives that flow very cohesively. The first story is about a slave Samuel Woodward (played by Cuba Gooding Jr.) and his family trying to escape to Canada with the help of Underground Rail. At the same time an elder tells the other story about John Newton (played by Bernhard Forcher), a captain of a slave trader and Samuel’s great grandfather who’s life depends on Newton’s fate. The director Peter Cousens shows how the slaves were treated, whipped and cruelly tortured. Even though it is disturbing, he found the right way to illustrate one of the shameful periods in American history. Maybe that is why the movie got the R-rating, although in my opinion, it should be rated PG13. I mean come on! It should not be in the same ‘graphical violence’ category as The Conjuring. The whippings are not so graphic, the blood is not from off-screen and it is only shown from long distance shots. The villains in the Freedom movie are really evil and diabolical, even use the N-word which was not offensive back then. Besides the powerful Biblical messages and historical facts, there are a lot of great musical numbers in the movie. There is a song about Christ and one song in particular, the creation of well-know spiritual song, “Amazing Grace”.

Whether old or young, the message of God is understood in every language and anywhere on earth. However, with constant improvements in technology, people forget the true Christian values, and this movie will definitely open your eyes and soul to the wisdom of God, the One that has always been in our lives. As a Christian, I was mesmerised with the powerful Christian theme – it is not only historically correct, it also shows how the faith in Our Lord has helped slaves overcome hard living.

Freedom is a must-watch movie. It will teach you and inspire you. And remember, whenever you find yourself in times of trouble, know Our Lord and Saviour Jesus Christ has a way to bring holy justice to this world of ours. Everything that has, is and will happen in your life, is connected with God. Always.