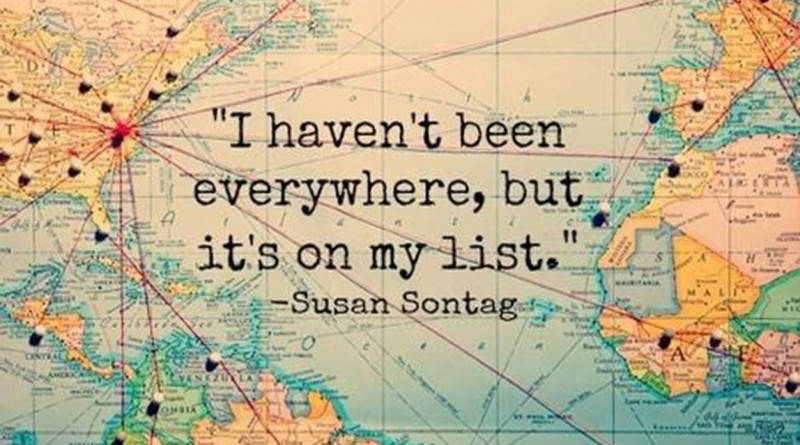 I don’t think there’s anyone who hasn’t been bitten by the traveling bug, especially now that our lives tend to become rather operated by an automatic mode, doing same things day in and day out. I always use up the chance to travel, which is why I’ve perfected the skills of packing to a pro-level and always keep certain clothes and toiletries packed just in case I have some opportunity to get on the road. Often, we use the excuse of not having the money enough or the proper amount of days off to embark on an adventure, but you don’t have to go far off to be able to get the excitement you so long for.

As I was reading through magazines years ago, one sentence entered my mind in particular and hasn’t left ever since: “When was the last time you did something for the first time?” That really made me wonder; I’d been on trips through our notable cities and certainly was no stranger to travelling abroad frequently so what could I do that I hadn’t done before, and then and there I decided to learn more about our surrounding greenery and the secrets woods and rocks hide (which later brought about the passion for underground adventures). I have to admit Percy Harrison Fawcett’s obsession with Amazon’s Lost City of Z was quite an inspiration, but I had no intention of getting lost though I hoped I might discover some lost city as well. I thought, even if I don’t, it would still make for a thrilling adventure. And so it was.

I’m lucky to be part of such a technologically advanced world, so that sure gives me better chances than those Fawcett had, but instead of uncovering Amazon’s secrets, I started uncovering the mysteries of Australian caves – mind you, with all the prior planning of course. It was challenging to have to change my way of packing because this kind of travel required more equipment and more light clothing. Since being in caves means being underground with limited source of lighting, I had to equip myself with the proper headlamp, so I’d have my hands free for better balance through rocky steps and slippery trails, and still have the right amount of lighting. Travelling to such remote places, where it’s not so easy to replace batteries, I figured my best option would be to buy LED headlamp rechargeable design.

I must admit I was stunned once I got to see the LED headlamp rechargeable products shops had for sale, made sturdy enough to be durable and withstand drops as well as have weatherproof properties to resist rust with the optimum light in the range of 250 up to 2.300 lumens, perfect for getting the whole sight of delicate stalactites and stalagmites – all I can say is the evolution of technology is a fast one. My basic cave visiting kit consists of headlamp, camera, boots and a water bottle plus a few nutritious snacks. Most of the cave tours provide the proper helmet, but it doesn’t hurt carrying your own as well.

Don’t fall in the trap of people who say caves don’t have much to offer and have basically the same things to see, every cave is special on its own and has plenty of breathtaking formations to offer. From easily reachable limestone caves, bat habitats and fossils as in Naracoorte, to unmatched formations, Australian caves hide many secrets, all it takes is arranging a tour and getting on your way. Have you considered having such an adventure for the first time or have you already had your share?